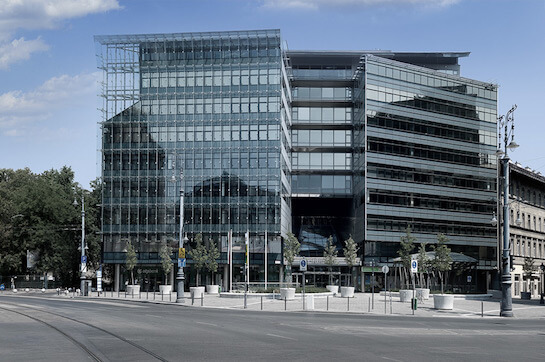 With 18 tenants, the Kálvin Square office building of ConvergenCE has 96% occupancy. Among its tenants, there are companies like Philip Morris Hungary, Faludi Wolf Theiss Lawyers, Aegon Hungary and GEOX. Currently, there is only one, 136 sq metre, office space available.

The nine floor, 9500 m² office building is situated in the heart of the capital. Its inner appearance has been considerably renewed and its services have been expanded since ConvergenCE purchased it and started managing it in April 2015. With some creative and efficient changes, ConvergenCE has significantly refreshed the inner looks of the building, adding to the comfort of tenants.

“By creating a living, green wall of plants, we have made the reception area much more friendly; we have completely redecorated lift lobbies and community spaces and carried out a complete rebranding of the building. In addition, we have installed new dressing rooms with showers for bicycle-users, as this is an essential requirement in today’s office buildings” – said Csaba Zeley, Head of Asset Managament at ConvergenCE.

Excellently located, situated at the junction of two metro lines, and at the stops of several trams and buses, Kálvin Square offers a range of extra services; on the ground floor, there is a café, a bank and a pharmacy. In addition, there is a post office, and a wide range of restaurants and shops in the immediate neighbourhood. Naturally, the most attractive feature of the building, however, is its location: there are hardly any other modern office buildings at the junction of two metro lines in Budapest.